Legacy Systems – What’s In A Name?

But are they all the same thing? Is legacy migration the same as legacy modernization? Is one of them the same as lift and shift? What about refactoring, re-platforming or, my favorite, “package”? We’ve been as guilty as anyone for using terms interchangeably (particularly legacy modernization and legacy migration) and the aim of this post is to set out a new standard set of terms, to explain each and then how these terms map against the terms used by Gartner, Microsoft and, indeed, those we have previously used.

Accepting the terms “legacy” and “application” to be interchangeable, the following table outlines the different terms in use today, with a description for each approach and a proposed set of standard terms to be used henceforth (certainly by us). 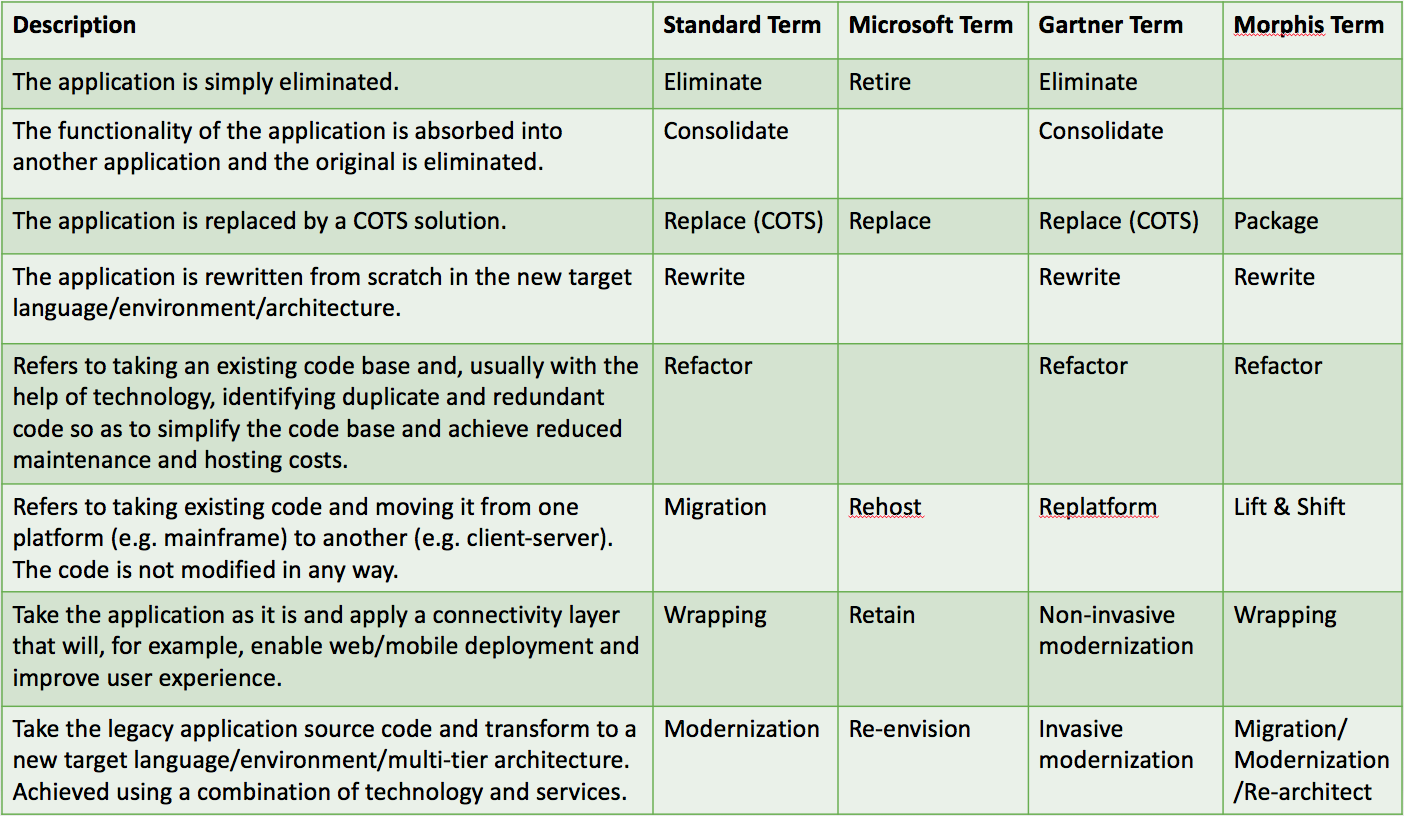 Which of these approaches is most appropriate under which circumstances depends on the drivers forcing the business to deal with the legacy system, i.e. why it’s no longer “fit for purpose”. We covered these drivers (and the related best approach) in detail in our white paper “Breaking the Shackles of Legacy Systems” which you can access here.

We will be refreshing that white paper over the coming weeks. If you would like to ensure early access then pop your details in the contact form below and we will email it to you as soon as it’s complete.

Technical debt and the speed of technological change pretty well ensure that every new application is a legacy application in a matter of years, if not months. As such it’s no surprise that businesses are spending 80% of their IT/development budget “keeping the lights on”. Our next post will explore technical debt in more detail and discuss strategies to better manage development such that the problem doesn’t snowball as it has in the past. This will build on our Learning to Fish post from the beginning of the year.

Do you have questions for us? We’re super-responsive so please use the Contact tab up above. Want to make sure you don’t miss a post? You can subscribe down below which will ensure details of new posts are delivered to your inbox. Morphis – the no drama approach to Modernization (check the table, that’s what we do!)

What United Really Should Have Learned From Cavemen

We’ve all seen it – the horrific treatment of a passenger being removed from a United Airlines flight from Chicago to Louisville to make space for crew. [Quick segue – if you haven’t seen the video, please leave a comment below letting us know how you managed to avoid it and then maybe others of us can learn ‘disconnection’ from you].

But it’s not that kind of caveman approach that I’m referring to in the title of this post. There is an aspect of caveman society that would have easily prevented this incident taking place…

So as I pondered last night, what kind of organization would facilitate this situation? I was in a similar situation last year flying United to Toronto. It was a business trip, not overbooked but the outside temperature meant the weight rating changed and a few people needed to get off. It was a Sunday morning and the sole purpose of my trip was a Sunday evening event so the voucher for later travel to Toronto was of no value to me and I did not volunteer. Others did, no big drama.

But it made me think, why didn’t the gate staff on the United Chicago-Louisville flight not change the offer from an $800 voucher [to fly later on United] to something more attractive? $800 in cash? $1000 in cash? It would have been a much easier solution and more fun for the passengers (definitely more fun than being beaten up). Somebody would have volunteered pretty quickly with the changing and growing incentive.

Rules. Yes, rules. The rules don’t allow it. The first “apology” from the United CEO confirmed that procedure was followed correctly. So why didn’t a member of United staff break the rules and get creative? This is where caveman society comes in. Nobody broke the rules because, if they did, they would risk losing their job. They don’t feel safe, a situation created by the lack of leadership in United, which is emblematic of a lack of trust and cooperation in the organization. Of course, it’s not just United who suffer from this, I would imagine upwards of 90% of modern corporations are very similar.

Caveman society was totally dependent on trust and cooperation. Simon Sinek explains the concept and posits a much better leadership paradigm in the short video below. Interestingly, having just re-watched the video, he gives an example of rule following from the airline industry…

And what has all of this got to do with legacy modernization? Well, we post once a week on this blog and every week I read my legacy modernization alerts to see what’s happening in the industry. And every week I see very similar stories on a) the impact of running old legacy systems (security breaches, inability to implement big data etc.), and then b) why legacy systems are not being replaced/modernized/killed.

Lots of logic is delivered as an answer to b), but the underlying challenge is much more “emotional”. People are scared of taking risks (or even doing anything out of the ordinary). There are rules to be followed, and they feel much safer following the rules (or not sticking their heads above the parapet). What kind of society have we created that results in a customer being beaten up rather than enabling a member of staff to think creatively or break the rules? What would the cavemen think?