I was watching BBC News last night and several, seemingly unrelated, stories were presented in the manner of mainstream news today – with heavy reliance on the soundbite:

Each of us can jump on whichever of these causes resonates most with us. That’s linear thinking which we can amplify through social media.

[Note to reader: this is a legacy modernization blog, you are in the right place, please bear with me.]

Of course, we live in a complex, non-linear world and it is beneficial (but much harder) to look for cause and effect and the interrelation between what may seem to be unrelated issues. For example, knowledge of the UK farming sector reveals that:

This is not meant to be a political statement and I’m sure it’s politically naive but take it as a basic attempt to link seemingly unrelated issues. It’s simplistic but, hopefully, illustrative.

Back to legacy modernization and why I’m writing this post. This jumped out at me: Health IT Spending Rises for Patient Satisfaction, Big Data. Within the article the comment that “No longer are legacy systems the only major focus for hospital tech investment. According to the survey, maintaining compliance and improving patient satisfaction are major motivators behind health IT spending increases.”

As if these issues are unrelated. If the changes demanded by compliance are difficult to incorporate within a legacy system then the legacy system is going to inhibit the ability to remain compliant. Equally, as a patient, I’m going to be dissatisfied if my personal data is compromised by the Healthcare provider. As we’ve discussed previously, data breaches within healthcare are directly related to the use of outdated legacy systems.

In turn this reminded me of one of the first posts on this blog. The 2015 CIO Technology Priorities as surveyed by Gartner which [similarly] viewed the priorities in a linear way. Within that post we detailed how, in fact, legacy modernization potentially impacted each of the other priorities even though it was called out separately.

Out of interest, I looked up the 2016 CIO priorities. 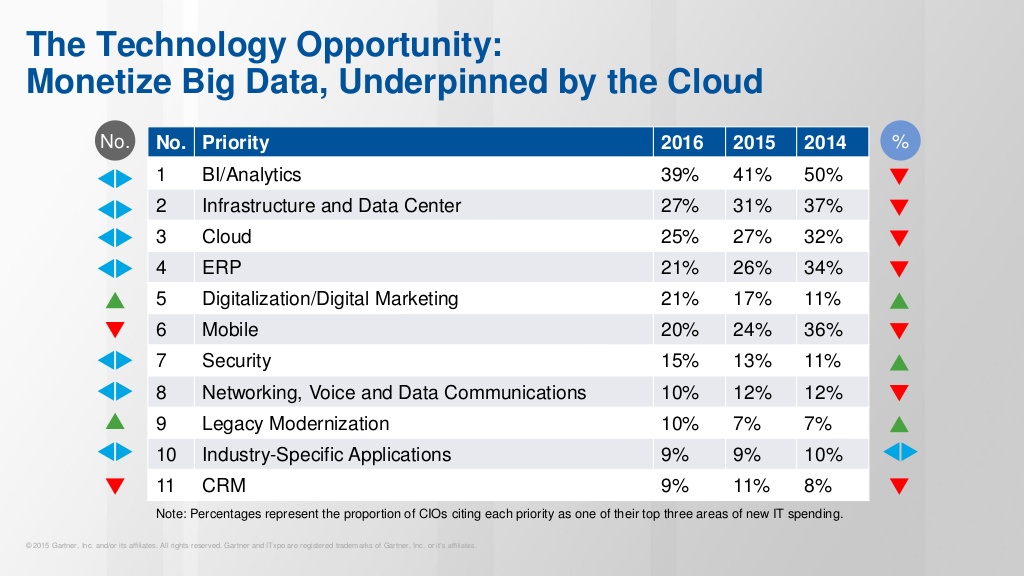 The world is complex, our businesses are complex. Looking for soundbite solutions is likely to leave the underlying problem unresolved. Oh, and this complexity is increasing exponentially – at least in the technology world. Sermon over. Happy New Year! As ever, leave us a comment if you want to drive the direction of our content.